How to choose the right pneumatic motor for the job ?

A common mistake when considering which pneumatic motor to buy is to focus on the mechanics rather than the job you want the motor to do. For example, you might say "I need a motor that can operate at X speed", or "that operates at a torque level of Y"?

Equally, you may think you need a high power range motor, when in fact a standard power motor with the right reduction gear box would do the job better.

So, the starting point should always be ‘what do I need this motor to do?’ and work backwards from there to define – and refine – the mechanics.

Speed, torque and power levels are inter-related according to the equation : Therefore, when choosing a motor, you need to be aware of all three and how they impact on each other.

A touch of magic in a box

As many uses for pneumatic motors require lower speeds and higher torques, Modec compressed air motors are designed in two parts.
The pneumatic part at the back transforms the air energy into mechanical energy, while the front part is the planetary gear box which acts to reduce the speed, thereby proportionally increasing the torque level. The gear box is a simple mechanism – one or more slower satellite rings orbit the central pinion ring directly attached to the motor’s shaft (see diagram) in order to reduce the rotation speed. As the torque and the speed are inversely proportional, this action also increases the torque. With no reduction, a motor will have a very high speed but a very low torque.
If you set a reduction ratio of 2:1, the speed decreases by half and the torque doubles; set a reduction ratio of 4:1 and the speed is slowed to a quarter of the original speed while the torque quadruples, and so on. Speed and torque levels can also be controlled by adjusting the air flow or air pressure. Reducing the air flow will reduce the speed of the motor. You can either reduce the air supply before it enters the motor by adding an air flow regulator to the feeding pipe, or – preferably – you can reduce it at the air exhaust point, again fixing a regulator. Although reducing air flow before entry results in slightly less air consumption, it will also reduce the starting torque level and risks creating turbulence at the entry point which may destabilise the motor function. On the other hand, reducing the exhaust air will not have any adverse effect on the starting torque or the functioning stability. Having a clear picture of what your pneumatic motor needs to do will help you, and us, to understand speed and torque requirements. As a result, we can ensure you select the correct power range motor and the most suitable planetary gear box for the job, as well as identifying the need for any air flow or air pressure adjustments. 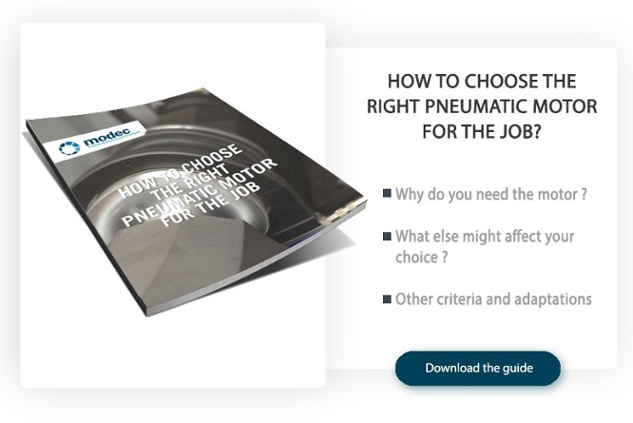